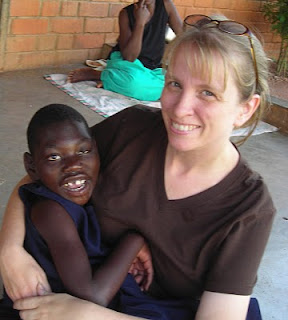 GSF is full of sweet and great stories of kids whom God obviously has His hand on. One of the sweetest is of Gloria. It has been said that Gloria's mom had measles when she was pregnant with Gloria. Gloria was born with severe cerebral palsy and mental retardation. I have been told that many kids from Gloria's tribe who have deformities "accidentally die" as babies. But Gloria did not die--God had more for her to do! She came to GSF 5 years ago in 2006; she was estimated to be 4 years old at the time. She received much therapy and love. Her story taught me that God values all life!

When I first saw Gloria, I didn't know how to approach her. She would want me to lift her but she was just too big. Finally one day, an ENT came to visit GSF and went to look in Gloria's ears. I sat down to hold her so he could check her. I cradled her in my arms and she immediately snuggled in! I was floored! She just wanted to be cradled. God taught me through Gloria that everyone desires love in one way or another and I should strive to give it. I loved going and holding her and she loved it as well. I grew to love Gloria dearly.

Early last year, Gloria got really sick with Typhoid. How she got typhoid, we will never really know but she became very weak and small. She was in the hospital for a long time but finally got to come home and we all rejoiced. About a month later, chicken pox spread around the orphanage and Gloria got it the worst. It was all over her body and inside as well. Eventually Gloria recovered from chicken pox and we were all relieved. She then began a cycle of being in and out of the hospital due to pneumonia at least 4 times. Several times we thought we were going to lose her. We have sent out blog updates asking for you to pray for her numerous times and you have prayed and God always answered our prayers. Many of you will remember the entry about Lilly going to the hospital and praying for Gloria. God taught me again that God had Gloria's life in His hands and He was a miracle working God.

Through this time of Gloria's illnesses, we had 2 other children die (Norah in September and Emmanuel in January). Both deaths were difficult and very eye opening into the differences of how this culture deals with death compared to the culture I grew up in. Both deaths were in the early morning and it was so difficult waking up to the news and sharing it with others. I began to dread the day that God would call our sweet Gloria home and even asked that He would take her during the day. At the same time, when I would see Gloria suffering, I would ask Him to take away her suffering. I knew she would be so much better off. One evening, Gloria was gasping for air after choking on something. We had to rush her to the hospital. I asked God if this was the end and told Him I was dreading it. Gloria defied death again and came home the very next morning smiling and alert. God gently reminded me that everything was in His timing.

Three weeks later, I was sitting on my veranda and got a "Gloria update" from Sarah, one of the nurses. She seemed okay but did have a fever and was having a difficult time breathing. None of us thought much about it as she had struggled so many times before. About an hour later, Mark walked out of the back room holding my phone and said that Sarah just called and she couldn't find a pulse on Gloria. I stopped . . . what was the scene going to be like when I went to her house. Mark raced on over but I hesitantly put on my shoes and had a chat with God as I walked over to the house. Believe it or not, when I arrived I came upon a very peaceful scene. They had Gloria laying out on a mattress on the back veranda working on her. We had said we wanted to do what we could to try to save her life. So the nurses and others were courageously but so peacefully working to see if she would begin to breath again. Gloria went into the presence of her Heavenly Father March 14, 2011 at approx 8:30 am. A glorious morning--praise Him that it was a beautiful sunny morning! The arrangements were taken care of effortlessly (unlike the other two). We had the memorial service for Gloria at 4:30 that same day. Her uncle and aunt took the body to her grandfather's land many hours away the next day for the burial. In all of this, God taught me that even when He takes one of His loved ones home, He still provides and lovingly cares for those left behind. I so often dread those things that God in His time gives me the grace and peace to deal with.

God is a God of peace! God teaches us even through those whom the world calls the "least of these." He loves and cares for them and wants us to learn to love and care for them. Praise God for Gloria's life!
Posted by Amy at 5:02 PM

Thank you for sharing such a beautiful post about Gloria's life and how God used her here on earth.

Thi s story will lay on my heart

What special work God has entrusted to your family. Thank you for sharing about this beautiful girl and GSF.

Amy, you are constantly in my prayers...your family and all the others at GSF. Thank you for your love and dedication to His children there.

When we were called to go to Good Shepherd's Fold Children's and Babies' Home in Buundo, Uganda, God confirmed in our hearts Proverbs 14:26. In the fear of the LORD there is strong confidence, And his children will have refuge. The Lord, with the strong confidence He gives, is the only reason we are here and have been able to stay here. We are able to find our refuge and our strength in Him. You are welcome to follow along as our family learns of His strength and confidence and are called to share that with others.

Our mission and orphanage